Is there anything better than a warm piece of fresh naan bread in your hand? This soft, chewy Indian flatbread is much loved and very popular. And making it at home is a super rewarding process. I’ll show you a great way to make delicious naan bread right at home so you can enjoy it any time!

I love Indian food. The aromas, the flavors, the textures, the colors – I love it all. And whether I’m munching on crunchy onion bhaji or savoring saag paneer from my favorite Indian restaurant, I’m always enjoying it with a piece of warm, fluffy naan.

To this day, there are few things that make me as happy as a simple piece of this Indian flatbread dipped in raita.

Happily, The Prince has shared my love of Indian food since he was a little boy. We would set up a feast of Chicken Tikka Masala, samosas, naan and raita in front of a Marvel or Harry Potter movie that we’ve already seen 100 times. Those were the best nights.

What’s the difference between naan and pita?

Naan, a staple of Indian cuisine, is a simple flatbread traditionally made in a clay oven. It usually consists of flour, water, yeast and salt. Most naan recipes are made with either egg, milk or yogurt, and sometimes a combination. This makes naan soft, pliable and flavorful.

It’s different from pita bread in this way, as pita bread does not usually contain any milk or yogurt. Pita is a drier, less fluffy type of flatbread that often has a pocket for stuffing.

Naan is traditionally served alongside a main dish to help sop up the sauce. But my favorite thing to dip naan in is raita.

What’s in this naan bread recipe

The ingredients for homemade naan are simple and humble. Here’s all you’ll need:

How to make homemade naan

Making this Indian flatbread isn’t hard. Just stick to the steps that I’ve outlined below and try not to deviate, and you’ll be good:

Once your naan is ready to cook, it’s a quick process. The Prince usually helps me because two hands are better than one. But once you get your rhythm going, you can easily do it by yourself:

That’s literally all it takes, probably 2-3 minutes total per piece. If your pan is big enough to fit two pieces at once, the process will go faster. That’s when either an extra person or some really good rhythm comes into play.

The Best Way to Enjoy Naan

The most enjoyable way to eat naan is when it’s warm. As it starts to cool to room temperature, you’ll notice that it will become firmer and less pliable. A quick hit in the microwave will loosen it up again.

How to store leftover naan

If you happen to have any leftover naan bread, the best way to keep it fresh is by storing it in aluminum foil or an airtight container at room temperature. Since homemade naan does not have any preservatives like store-bought naan bread, you’ll want to consume it within a few days.

You may be tempted to put it in the fridge.

how to reheat naan

Placing leftover naan bread on a microwave-safe plate and heating it for thirty seconds will restore its soft texture. This is certainly the quickest way to do it.

But for the best results, you want to steam it. And this reheating process will only take a couple of minutes.

Arrange your naan on a baking sheet and sprinkle it with a little water. Then warm it in the oven for 3 or 4 minutes at a medium heat, between 300-350F degrees.

can you freeze naan bread?

Yes! The easiest way is to wrap your leftover naan in plastic wrap and then place it inside a freezer-safe plastic bag for double protection against freezer burn. Defrost it on the countertop and then follow the reheating instructions above.

If you don’t have time to defrost, just do the same process with frozen naan bread and add 5 minutes to the reheating time.

Naan has become so popular that you can even find it in most grocery stores now. People are getting so creative with all the different ways to enjoy it. From using naan as a pizza base to using it as a wrap for sandwiches, the possibilities are endless.

But have you thought about using naan at breakfast? Here are some fun ideas:

side dishes for naan

Most Indian restaurants will bring out a side of raita to your table when you’re having naan bread, and this is probably my favorite part of the meal! Raita is a yogurt-based dipping sauce that often contains cucumber and coriander. It’s cooling on the palate, so it makes a great side dish for spicier Indian main dishes.

But really, any Indian dish should be served with naan. Use it for sopping up the delicious pink sauce of Chicken Tikka Masala or a vegetarian curry dish. Anything saucy should have some naan for dipping!

You’re going to have so much fun making this homemade Indian flatbread. Let me know how it goes! Leave a comment or drop a rating below. Enjoy!

For more bread recipes, try these:

For more Indian recipes, try these: 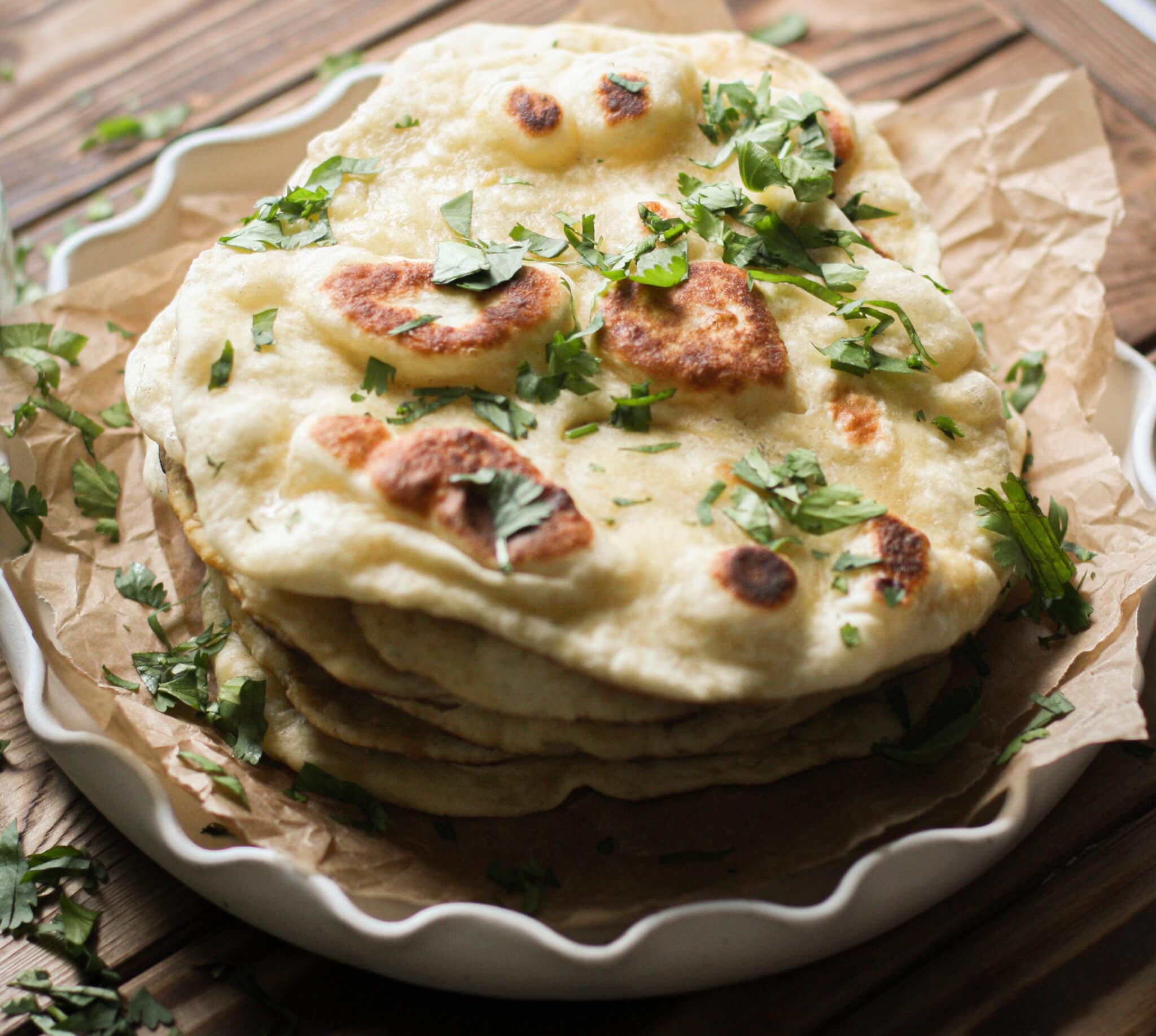 How to Make Naan (Indian Flatbread)

Keyword appetizers, vegetarian
Tried this recipe?Let us know how it was!