When my kids were younger, healthy food was all they knew. Their sandwiches were on 100% whole wheat bread, their peanut butter was all natural (none of that sugary stuff) and they ate something green at every meal. Then, suddenly, the record came to a screeching halt and they decided they would only eat white bread. And fake peanut butter. And they wanted dessert – every single night. I decided I needed to get more creative. This led to many, many failed attempts at disguising whole grains and vegetables, and so much wasted food – it was like they could smell my fear. This Stovetop Chicken with Wild Rice & Mushrooms was one of the times I got lucky – it was insta-yum for both kids. Victory! How did I do it, you ask? I made sure the flavor outweighed the healthy. And the rest was luck.

What’s in this Stovetop Chicken besides Wild Rice and Mushrooms?

Of course, adding cheese to anything never hurts. But I also wouldn’t describe this dish as “cheesy”. The goat cheese in this Stovetop Chicken with Wild Rice & Mushrooms just adds a tangy creaminess that so nicely complements the earthiness of the mushrooms and rice. If goat cheese isn’t your thing, cream cheese would be a great substitute.

To amp up the flavor I mentioned earlier, we’ve got garlic, shallots, fresh thyme and rosemary, and a splash of Sherry. That way, we can sneak in a healthy dose of spinach without anybody noticing.

Wild rice is an underused grain, in my opinion. It has such a fantastic earthy flavor and nutty texture and it makes dishes taste so much more complex than a regular white rice. It has an actual flavor profile, unlike white rice, that I find very comforting in wintertime dishes like this Stovetop Chicken with Wild Rice & Mushrooms.

How to make this Skillet Chicken

First things, first, make the rice. You’re going to cook it ahead of time, either on the stove or in a rice cooker (which I highly recommend, they make life so easy). Your other ingredients will come together in just one skillet and you’ll add the rice in at the end.

You’ll brown the chicken first, followed by the garlic, shallots and mushrooms. Mushrooms give off lots of liquid as they cook, so be sure to cook them until all the liquid is released and they’re getting crispy.

The rest of this dish is made by adding in the goat cheese, chicken stock, half and half and Sherry to the skillet. As your skillet comes together, you’ll notice another one of my secrets to tricking my (and hopefully your) kids – the aromas. There’s something about the smell of shallots, garlic and sherry simmering in a high-quality extra virgin olive oil that is downright swoonworthy.

Even before they tried it, the kids walked into the kitchen and said, “Oooh, it smells good in here.” They don’t even know what they’re smelling, only that its something good. And you’ll feel good about filling your bellies with this healthy-ish, satisfying cold weather meal. Enjoy! 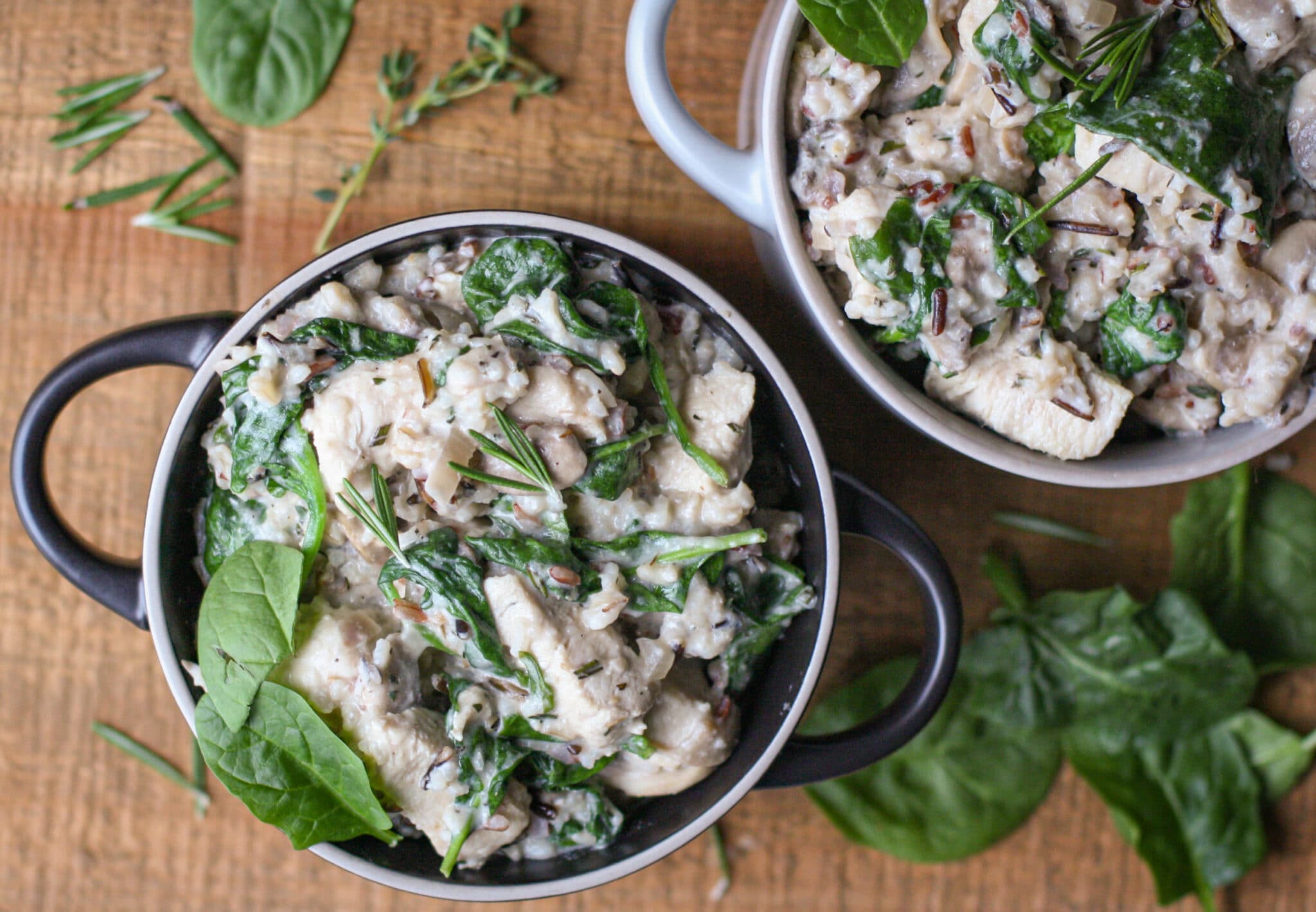 Keyword chicken, dinner, gluten free
Tried this recipe?Let us know how it was!