Ah, glorious cherry season is finally upon us! When I tell you I love cherries, I mean I loooovveee cherries. Always have. Cherry flavored anything is what I go for. Cherries only take a very slight second seat to lemons in my heart. There is always, and I mean always, a bowl of fresh cherries on the kitchen counter during the summer months. In fact, the best gift my mother-in-law ever gave me was a cherry pitter. You would have thought she gave me a Gucci bag, I was so damn excited. It’s the little things, you know? It’s also a little surprising that, as much as I love cherries, I don’t really bake with them much. I’ve always preferred them in their natural, unaltered state. Until now. This Cherry Bourbon Galette is a game changer.

Making this Cherry Bourbon Galette reminds me of when I was very young and we had a cherry tree growing in our side yard. Every summer, my dad would go up on a ladder into the tree while my mom and I stood with a big mixing bowl on the ground. He would pluck the cherries off the tree, drop them down and we would catch them in the bowl. My mom always had a bowl of cherries on the countertop when I was growing up – probably where I got it from.

What is a galette?

A galette is a very rustic and laid back version of a pie. You don’t have to spend hours in the kitchen getting the crust to look perfect. So it’s ideal for the low key summer life. You kind of just fold it however you want, and the lack of perfection is where its charm lies. The dough for the crust comes together much like traditional pie crust, so you get a similar flavor without the hassle. And you can fill a galette crust with a whole host of summer fruits.

For this Cherry Bourbon Galette, I definitely went down the boozy road. There’s a bunch of bourbon in this thing, but you can barely taste it when it’s done. Bourbon adds such a cool dimension and actually deepens the sweet-tart flavor that cherries naturally have. In a saucepan, you’ll cook the cherries with sugar and lemon juice. Once the cherries start to give off juice, pour the bourbon in and allow it to cook down.

And if bourbon isn’t your thing, you could try using brandy instead. Once the booze cooks down, you’re left with a rich, jammy cherry filling that could be spooned over ice cream or Greek yogurt if you weren’t putting it into this galette.

Speaking of ice cream – it’s a must. I mean, this Cherry Bourbon Galette is so good on its own, but it’s almost begging for a scoop of vanilla ice cream on top. So don’t make it beg, just give it what it wants. And enjoy this very kicked back, very cherry, very summery dessert this weekend. I hope you love it! 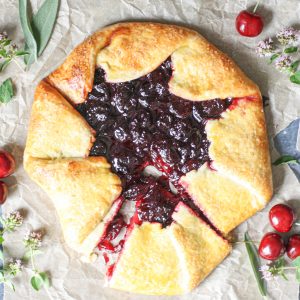 Keyword bourbon, dessert, summer
Tried this recipe?Let us know how it was!