I grew up with a mother and a grandmother who drank nothing but coffee all day long. My mom worked during the week, so on the weekends you’d find her sitting at the kitchen table, talking to her girlfriends on the phone, twirling the long blue phone cord around her finger and drinking black coffee. People coming to visit? Let’s put on a pot of coffee. Meeting a friend out? Of course, for coffee. So, coffee culture has always been pretty big in my life. Nowadays I take my coffee black on most mornings, but when the weekend comes? Gimme that cream and something sweet! And what better way to enjoy a hot cup of coffee than with a this Triple Cinnamon Coffee Cake?

What makes the cinnamon triple?

We’ve got three layers of cinnamon going on here. The first is in the actual cake. To get the cinnamon ripple, just pour half of the cake batter into the pan, sprinkle with ground cinnamon, and then top it with the other half of batter.

The second layer of cinnamon is in the crumble on top. When I think coffee cake, I first think of the buttery, crumbly topping. I know that there are plenty of good coffee cakes out there that don’t have the crumble, but I grew up on those Entenmann’s cakes with the crumble on top of spongy, yellow cake. My dad would hit up the outlet and stock our freezer to the brim, cake on top of cake. So, to me, the crumble is a must. Not only a must, but undoubtedly the best part. That perfect flavor balance of the sweet, cinnamony crumble and dark roast coffee is pure heaven.

And the third layer is the cinnamon drizzle, which is a simple mixture of confectioner’s sugar, cinnamon and milk. It puts the finishing touch on this Triple Cinnamon Coffee Cake and is not to be missed.

I recently discovered roasted cinnamon when McCormick included it in a little care package they sent me. As soon as I pulled it out of the box I immediately thought coffee cake. Roasted cinnamon is just what you think it would be – it’s like regular ground cinnamon, turbo-charged. The flavor is deep, earthy and pronounced. For cinnamon lovers like myself, it’s an amazing find.

Using it in any recipe that calls for cinnamon will punch the flavor up to the next level, and I knew it would really make this Triple Cinnamon Coffee Cake shine. If you can’t find it, no biggie. The cake will still be a winner, I promise!

And the smell when it comes out of the oven? To die for. Only made better by the cinnamon-sugar glaze that you’ll drizzle on top. Definitely don’t skip the glaze. It totally makes this Triple Cinnamon Coffee Cake. So what are you waiting for? Put that pot of coffee on and let’s get baking! 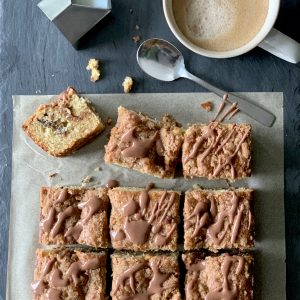 Keyword cake, dessert
Tried this recipe?Let us know how it was!